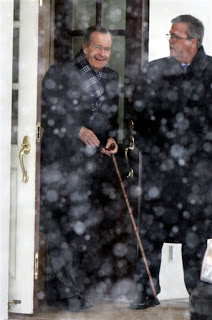 The White House described it as a social call, but feel free to speculate. Jeb Bush's presence was unexpected - the White House hadn't said anything about him being invited. It's all very... bipartisan. The Bushes were at the White House for just over a half-hour, emerging in a driving snow that over the next few hours will blanket the capital with several inches of fluff.

"Good meeting, good meeting," the elder Bush, 85 and walking with a cane, said in response to a question called out by a reporter. Bush the elder hosted Obama at Texas A&M a few months back, at an event celebrating community service/volunteerism and marking the 20th anniversary of his Points of Light project.