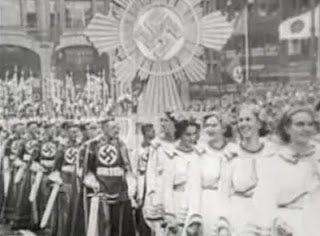 The occult calendar enters an active period from April 19 to May 1. Tragic events associated with period may in fact, represent public sacrifices. The birthday of Adolf Hitler, April 20, is one notable date. It's time to observe occult underpinnings of Third Reich. Many Americans fail to acknowledge occult roots of Nazi regime. US students are simply not taught Naziism represents more than a political party. In school, Americans are exposed to racial supremacy of Nazi ideology, but what's missing is deep occult teachings that date back to times of Babylon and Atlantis. Nazis: The Occult Conspiracy, a 1998 Discovery channel documentary, shows how Adolph Hitler and the Nazi regime made use of ancient mysticism and occultism to win the war.

A caption included under video, provides fuller account: "The Nazi's also used occult mind control techniques to brainwash Germans to perceive themselves as the master-race. Astrology, Reincarnation, a new blood religion. In this chilling yet fascinating glimpse at recent historical events, discover how Nazi beliefs were based on a perversion of ancient myths, pagan lore and the occult. In their quest to create an Aryan super race, the Nazis left no myth or religion unexploited, using astrological forecasts to plan battles; pendulums to locate allied battleships; the prophesies of Nostradamus to frighten the Allies, and sacred symbols, such as Nordic runes, to inspire their warriors to battle." Nazi beliefs have their foundation in the deep occult practices that date back to ancient times.