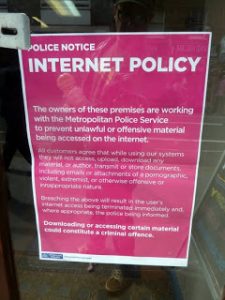 from steve watson: Police signs have begun springing up in internet cafes in London warning users that they could be reported to the police and face criminal charges if they access “extremist”, “offensive” or “inappropriate” material. The signs, which state that the owners of the premises are actively working with the Metropolitan police, have drawn criticism due to their vagueness and questionable legality. “Downloading or accessing certain material could constitute a criminal offence” states the bright pink sign. Comments concerning the signs on both flickr and popular blog site Boing Boing encapsulate the threat such policies pose… We have previously reported on filtering and blocking of all kinds of political websites including Prisonplanet.com in public domains in both the UK and the US. This type of catch all censorship creep is part of an ongoing agenda to use legitimate concerns such child pornography to regulate and control the internet as a whole.