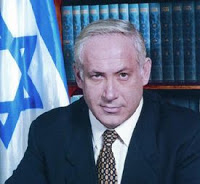 from nytimes: Asked tonight what the attack meant for relations between the United States and Israel, Benjamin Netanyahu, the former prime minister, replied, “It’s very good.” Then he edited himself: “Well, not very good, but it will generate immediate sympathy.” He predicted that the attack would “strengthen the bond between our two peoples, because we’ve experienced terror over so many decades, but the United States has now experienced a massive hemorrhaging of terror.”

from haaretz: The Israeli newspaper Ma’ariv on Wednesday reported that Likud leader Benjamin Netanyahu told an audience at Bar Ilan university that the September 11, 2001 terror attacks had been beneficial for Israel. “We are benefiting from one thing, and that is the attack on the Twin Towers and Pentagon, and the American struggle in Iraq,” Ma’ariv quoted the former prime minister as saying. He reportedly added that these events “swung American public opinion in our favor.”

One response to “netanyahu: 9/11 was/is good for israel”