a new theory of everything: phase space 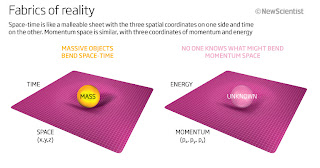 Move over Einstein, a new theory of everything called phase space, is covered in a recent NewScientist article. "So what is phase space? "It is a curious eight-dimensional world that merges our familiar four dimensions of space and time and a four-dimensional world called momentum space. Momentum space isn't as alien as it first sounds. When you look at the world around you, says [Lee] Smolin [at the Perimeter Institute for Theoretical Physics in Waterloo, Ontario, Canada], you don't ever observe space or time - instead you see energy and momentum...'If you go by what we observe, we don't live in space-time,' Smolin says. 'We live in momentum space.'"

"And just as space-time can be pictured as a coordinate system with time on one axis and space - its three dimensions condensed to one - on the other axis, the same is true of momentum space. In this case energy is on one axis and momentum - which, like space, has three components - is on the other (see diagram)." You may use phase space in your theoretical discussions, until the next theory of everything in vogue comes along!