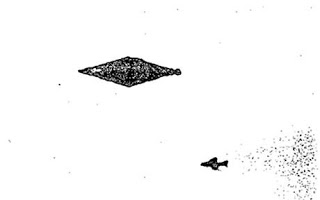 from telegraph: Declassified government files have revealed how Ministry of Defence (MoD) officials launched a top-level probe into a diamond shaped aircraft seen hovering above a Scottish village. Officials were so alarmed by the object, which was captured on camera, that they broke with established procedures and referred the sighting to ministers. They also overrode rules prohibiting investigations into UFO sightings not considered an immediate threat to national security, and spent more than a year trying to crack the still unexplained mystery. The disclosure about the incident is contained in more than 1,000 pages of official documentation, detailing hundreds of UFO sightings between 1987 and 1993, which has been made available publicly at the National Archives in Kew for the first time today. Their release comes at a time of increased reports of UFO activity in Britain.