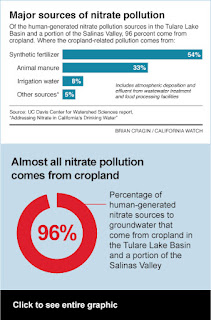 from civileats.com: Today, the Food & Environment Reporting Network–the first and only independent, non-profit, non-partisan news organization that produces investigative reporting on food, agriculture, and environmental health in partnership with local and national media outlets–published its third report, “Farming Communities Facing Crisis Over Nitrate Pollution, Study Says,” on msnbc.com. Reporter Stett Holbrook takes a deep dive into a new study by UC Davis that reveals that nitrate contamination is severe and getting worse for hundreds of thousands of people in California’s farming communities. The most comprehensive assessment so far to date, the report also reveals that agriculture is the main source of 96 percent of nitrate pollution. The five counties in the study area–among the top 10 agricultural producing counties in the United States–include about 40 percent of California’s irrigated cropland and more than half of its dairy herds, representing a $13.7 billion slice of the state’s economy, Holbrook reports.