nsa punishes qwest for refusing to spy on americans 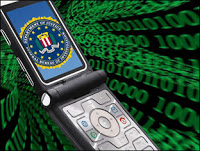 from thinkprogess: Documents released in an insider trading trial yesterday reveal that “the National Security Agency and other government agencies retaliated against Qwest because the Denver telco refused to go along with a phone spying program.” In the documents, former Qwest CEO Joe Nacchio is quoted as saying “the request was both inappropriate and illegal, and repeatedly refusing to go along with it.” Nacchio’s lawyer said the CEO “refused to turn over customer telephone records because he didn’t think the NSA program had legal standing.”