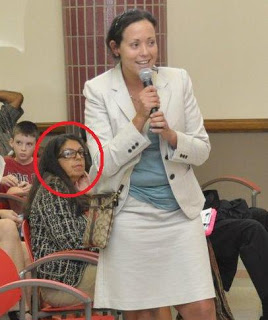 from lone star times: I was reading the Chron’s piece about Sheila Jackson Lee’s town hall, when something caught my eye:

“One supporter, Dr. Roxana Mayer, a physician who does not live in Jackson Lee’s district, praised the reform plan for overhauling a broken system. ‘I don’t know what there is in the bill that creates such panic,’ she said.”

In this video, Mayer claims to be a general practitioner, eliciting applause and even a hug from Queen Sheila:

I’m not sure why, but something didn’t smell right. So my colleagues and I did a little digging, and wouldn’t you know it? Roxana Mayer is, like, totally not a doctor. But she is an Obama campaign volunteer. Our own David Jennings secured a phone interview, in which Mayer admitted to impersonating a physician, saying – get this – she thought it would help her credibility. (It didn’t.)

Now here’s where it spins off into a whole new dimension of weird. See the bug-eyed woman seated behind not-doctor Mayer? Look familiar? Yes, that little ray of sunshine, who accompanied Mayer to the meeting, is none other than Maria Isabel, the unhinged moonbat who ran a Barack Obama campaign office, complete with Che Guevara flag. Hell, she’s even wearing the exact same outfit she wore the last time we mocked her! A word of advice to budding political operatives: when you need two plants, try to pick people smarter than actual plants. This isn’t brain surgery.