‘obama go back’ protest by farmers in india 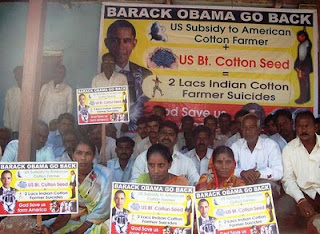 from gmwatch: Cotton growers in Vidarbha on Friday staged candle-light protests on the eve of US President Barack Obama's visit to the country, seeking to draw his attention to the plight of the agriculture sector in the region caused by American policies. Protests were held under the banner of the Vidarbha Jan Andolan Samiti (VJAS), with the main protest being organised at Hiwara village in Zari taluka of Yavatmal district where a rally was taken out demanding a ban on American seed 'Bt Cotton' and withdrawal of ongoing subsidies given to American cotton growers.

Farm widows and distressed farmers from surrounding villages participated in the march and raised the slogan 'Barack Obama Go Back', the VJAS said in a release here.

"The US President is our guest and we respect him. There is no intention to hurt his feeling as we want that the main reason behind mass genocide of cotton farmers in Vidarbha should be there in the agriculture agenda as we understand it is not in the listed subjects," VJAS president Kishor Tiwari said during the rally at Hiwara, it said.