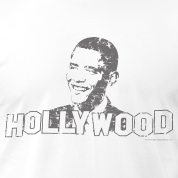 from hollywood reporter: Before he left Los Angeles for San Francisco on Tuesday [oct25], President Barack Obama stopped for an undisclosed meeting with some of the entertainment industry's high-level executives, as well as talent representatives with access to the industry's top stars and musical acts, The Hollywood Reporter has learned.