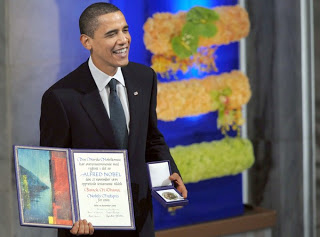 in other news, freedom is slavery & ignorance is strength...

from latimes: President Obama accepted the Nobel Peace Prize [in Oslo] today, acknowledging the irony of winning it as a wartime president and calling his own accomplishments "slight" in comparison to past winners.

But in his speech to the Nobel Committee, Obama spoke of the concept of a "just war" and the pursuit of a "just peace," which he said sometimes depends on more than simply refraining from violence.

Lauding the commitment of past Nobel laureates to nonviolence, Obama said that, as a head of state and commander-in-chief of a military at war sworn to protect and defend his nation, he cannot follow their examples alone.

"I face the world as it is, and cannot stand idle in the face of threats to the American people," Obama said. "For make no mistake: Evil does exist in the world. A nonviolent movement could not have halted Hitler's armies. Negotiations cannot convince Al Qaeda's leaders to lay down their arms. To say that force is sometimes necessary is not a call to cynicism - it is a recognition of history; the imperfections of man and the limits of reason."

With his remarks, delivered in the brief sunlight of the Norwegian winter's midday, Obama answered critics who complain that he was receiving the award before he has really done anything to achieve peace.

The award also comes just days after the president announced a military buildup in Afghanistan, a surge of 30,000 U.S. troops which the White House hopes will disable the terrorist headquarters in the region and bring the eight-year war to an end.