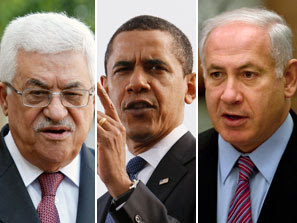 Obama to Hold 9/22 Talks With Israel & Palestine in NY

from latimes: Palestinian and Israeli leaders have agreed to meet with President Obama on Tuesday in New York, a three-way encounter the administration has been trying for weeks to broker, the White House announced Saturday. Israeli Prime Minister Benjamin Netanyahu and Palestinian Authority President Mahmoud Abbas will meet Obama on the sidelines of the United Nations General Assembly session, White House Press Secretary Robert Gibbs said in a statement. Each will also meet one-on-one with Obama.

It wasn't clear whether scheduling of the meetings portends a full-scale resumption of Middle East peace negotiations. White House officials had avoided setting preconditions for a three-way meeting, but did not want to hold one without some promise of progress.

There was no sign of a breakthrough when Obama's Middle East envoy, George J. Mitchell, returned to the United States on Friday after six days of talks. Mitchell has been trying for months to bring the two sides together. A key obstacle is growth of Jewish settlements in the West Bank and East Jerusalem, territory the Palestinians want for a future state.

The envoy failed to persuade Netanyahu to impose a settlement freeze or coax Abbas to restart peace talks without one.

Saturday's White House statement said the meetings this week will continue the administration's efforts "to lay the groundwork for the relaunch of negotiations, and to create a positive context for those negotiations."