from the folks who told you the air at ground zero was safe to breathe: you can drink poison & eat garbage, but that plant food you exhale must go … and then you’re next 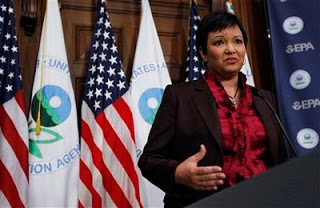 The announcement by the Environmental Protection Agency was clearly timed to build momentum toward an agreement at the international conference on climate change that opened Monday in Copenhagen, Denmark. It signaled the administration was prepared to push ahead for significant controls in the U.S. if Congress doesn’t act first on its own.

The price could be steep for both industry and consumers. The EPA finding clears the way for rules that eventually could force the sale of more fuel-efficient vehicles and require plants to install costly new equipment – at a cost of billions or even many tens of billions of dollars – or shift to other forms of energy.

No analysis has been conducted by the EPA on costs of such broad regulations, although the agency put the price tag of its proposed climate-related car rules at $60 billion, with an estimated benefit of $250 billion.

related: obama’s rule by epa decree is a coup d’etat against congress, made in britain

apologies for the faux news clip…