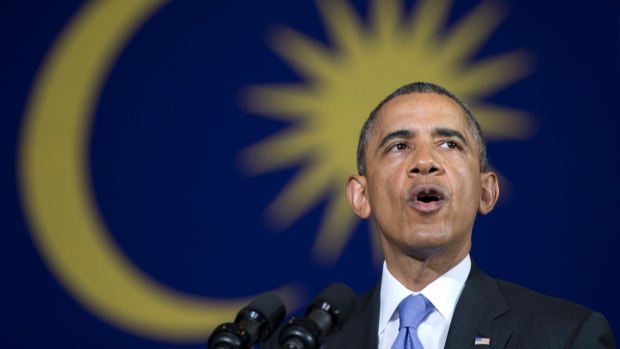 from chinadaily.com: As the dust settles on US President Barack Obama's Asian trip, it
seems that Washington got less out of it than its hosts, but Beijing is
now more aware of US intentions in the region, observers said.

During Obama's trip, Japan, South Korea, Malaysia and the Philippines
have achieved their goal of a greater US security presence but have
done little to advance the Trans-Pacific Partnership, a key strategic
goal of Obama's economic policy.

"Though Obama tried to avoid directly confronting China during the
four-nation visit, he did challenge Beijing by making strident remarks
in Japan and signing a military agreement with the Philippines, a move
China found provocative," said Sun Zhe, director of the Center of
China-US Relations at Tsinghua University.

The International New York Times said in a front page story on Monday
under the headline "Avoiding Beijing, but not ignoring it" that "on
every stop of his Asian journey in the past week, President Obama has
spoken to two audiences: America's allies and China".

Washington and Manila signed a decadelong agreement on Monday to allow a greater US military presence in the Philippines.

Obama warned on Tuesday against the use of force to resolve
territorial disputes as he addressed US and Filipino forces in Manila.

"We believe that international law must be upheld, that freedom of
navigation must be preserved and commerce must not be impeded. We
believe that disputes must be resolved peacefully and not by
intimidation or force," he said.

Beijing has said navigational freedom in the South China Sea has
never been interrupted and that it believes negotiation is the best way
to solve disputes.

Obama also assured Manila on Tuesday that a 1951 defense treaty
between the two nations commits the US to defend the Philippines.

"And no potential aggressor can be under the illusion that either of
them stands alone. In other words, our commitment to defend the
Philippines is ironclad. The US will keep that commitment because allies
will never stand alone," Obama said.

However, the US president did not give a clear-cut commitment to the
Philippines that US military forces would come to its aid in the event
of a conflict in the South China Sea.

This was in stark contrast to what Obama said in Japan where he said
the defense treaty with Tokyo covers the Diaoyu Islands, part of China's
sovereign territory.

Wu Shicun, president of the National Institute for the South China
Sea, said US assurances to Japan and the Philippines were aimed at
"conciliating" them and did not mean the US will rush to get involved in
any military conflict with China.

"Obama's promises to allies are more symbolic rather than substantive," he said.

Shi Yinhong, director of the Center for American Studies at Renmin
University of China in Beijing, told Reuters that the Obama
administration probably felt its message of deterrence to China and
reassurance to Japan and other allies was delivered successfully.

"But if we want to know if the trip seriously harmed US-China
relations and damaged US strategic and economic interests, well, that is
a difficult question to answer," Shi said.

Hong Kong-based Takungpao newspaper said in a commentary on Tuesday that the security situation in the region had worsened.

"Did Obama's Asia trip strike the right balance? No, quite the opposite," the paper said.

"The US has tried to consolidate alliances with countries such as
Japan and the Philippines, and this has deepened Beijing's concerns.
Those countries may now feel they have nothing to fear and they could
feel emboldened and this complicates the situation."

Sun from Tsinghua said Obama failed to realize his Trans-Pacific
Partnership goal and made little economic headway on the trip. The
partnership encompasses 12 Pacific countries but remains deeply divisive
among the public and politicians who fear that US goods will flood
their markets.

Washington may feel frustrated, Sun said, pointing out that Obama's trip resulted in nothing tangible on the economic front.

This was in sharp contrast to Beijing's massive economic cooperation
with Southeast Asian nations announced in recent years, he added.

Obama's talks with South Korean President Park Geun-hye also saw
little in the way of tangible benefits, either economically or
militarily, according to an editorial in South Korea's Chosun Ilbo
newspaper which said "the US cannot exert leadership in Asia only with
words".