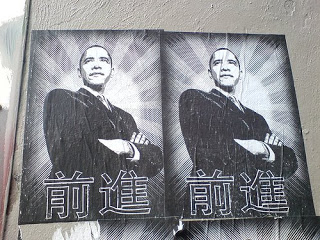 from bloomberg: President-elect Barack Obama will probably tear down long-standing barriers between the U.S.’s civilian and military space programs to speed up a mission to the moon amid the prospect of a new space race with China. Obama’s transition team is considering a collaboration between the Defense Department and the National Aeronautics and Space Administration because military rockets may be cheaper and ready sooner than the space agency’s planned launch vehicle, which isn’t slated to fly until 2015, according to people who’ve discussed the idea with the Obama team. The potential change comes as Pentagon concerns are rising over China’s space ambitions because of what is perceived as an eventual threat to U.S. defense satellites, the lofty battlefield eyes of the military. “The Obama administration will have all those issues on the table,” said Neal Lane, who served as President Bill Clinton’s science adviser and wrote recently that Obama must make early decisions critical to retaining U.S. space dominance. “The foreign affairs and national security implications have to be considered.”

1st ever masonic inaugural ball being held for obama

Tickets are limited, so you are encouraged to purchase yours quickly.

While other inauguration balls are costing $125-$500 or more per ticket, we’ve arranged for an evening with some amazing food, a great DJ, and brotherhood, all for $65 per ticket, we’ve also included an incentive to help pay the baby sitter, couples may go for just $120 a piece.

All proceeds from this event will be donated to the Masonic Foundation of the District of Columbia.

For more information, or to purchase tickets, visit:

from dpa: Bill Richardson had been tapped by president- elect Barack Obama to serve as commerce secretary in the incoming US administration, but on Sunday the New Mexico governor surprisingly withdrew his name from consideration for the position. Richardson cited an investigation of a company that had done business with New Mexico's government as grounds for the move. He did not provide details of the investigation, except to say that he and his administration 'have acted properly in all matters.' He said the probe would likely last for several weeks, or months, and would hamper his confirmation by the US Senate.