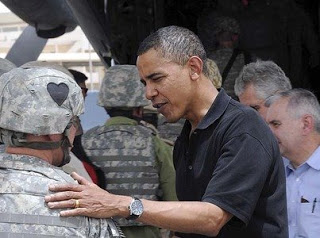 from jeremy scahill: As rage spreads in Afghanistan after US bombing that killed up to 130 people, unnamed Pentagon officials are spinning another cover-up. Defiant Obama moves ahead with troop increase... Standing between Hamid Karzai and Pakistani president Asif Ali Zardari on Wednesday, Obama said the US would “make every effort” to avoid civilian deaths in both countries (which are regularly bombed by the US). But as he was making those remarks, Defense Secretary Robert Gates was arriving in Kabul on Wednesday “to make sure that preparations were moving forward for the troop increase and that soldiers and Marines were getting the equipment they needed.”

huge US camp arises in afghan desert of death

obama set to revive military commissions
from washington post: The Obama administration is preparing to revive the system of military commissions established at Guantanamo Bay, Cuba, under new rules that would offer terrorism suspects greater legal protections, government officials said. The rules would block the use of evidence obtained from coercive interrogations, tighten the admissibility of hearsay testimony and allow detainees greater freedom to choose their attorneys, said the officials, who spoke on the condition of anonymity because they were not authorized to speak publicly.

obama reverses stance on immigration
from washington times: On the thorniest of political issues, President Obama has embraced the enforcement-first position on immigration that he criticized during last year's presidential campaign, and he now says he can't move forward with the type of comprehensive bill he wants until voters are convinced that the borders can be enforced.

memos shed light on cia use of sleep deprivation

cheney may be willing to testify under oath about torture program
from thinkprogress: Today on CBS’s Face the Nation, Vice President Cheney vigorously defended the Bush administration’s torture policies and his belief that by rejecting them, President Obama is raising “the risk to the American people of another attack.” Cheney said that the Bush administration’s interrogation policies will one day be viewed as “one of the great success stories of American intelligence.” When host Bob Schieffer asked Cheney whether he would be willing to testify to Congress under oath, Cheney initially hedged, but then indicated that he would be willing to do so...

black budget blows by $50b mark

update: obama to retain military tribunals for terrorism trials
from dpa: US President Barack Obama will continue to use military tribunals to put suspected terrorists on trial, The New York Times reported Friday on its website. Obama will retain the military commissions first established for terrorism trials by his predecessor, president George W Bush. But Obama plans to seek congressional approval for an expansion of defendant rights under the tribunal system, the Times reported, citing officials briefed on the Obama plan. The White House was expected to announce Obama's tribunal decision later Friday. Campaigning during the presidential election, which he won in November, Obama had sharply criticized Bush's tribunal system. Nine tribunal hearings were postponed when Obama took office in January, and US officials were expected to seek additional delays while the administration seeks to reform the military commission process.