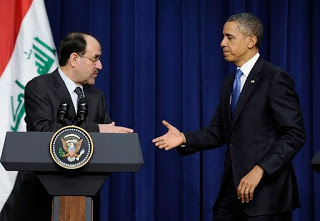 not counting those without heads...

from cbsnews: President Obama marked the end of the United States' almost nine-year war in Iraq on Monday, saying at an appearance with Iraqi Prime Minister Nouri al-Maliki that the final U.S. troops leave Iraq this year "with their heads held high."

Mr. Obama is taking something of a victory lap this week for fulfilling his campaign promise to end the war, which will effectively end when the several thousand remaining troops exit the country by December 31. On Saturday, he thanked service members at the annual Army-Navy football game; on Wednesday, he and first lady Michele Obama will visit Fort Bragg in North Carolina to speak to troops about the war.

"This is a season of homecomings," Mr. Obama said Monday at the White House, flanked by al-Maliki. "Military families across America are being reunited for the holidays."