from washington post: Even if only half of the projected 2 million to 4 million people show up for next month's presidential inauguration, the Washington region's roadways and transit systems will be too pressed to handle the crush, planners say. Officials are working out details of their transportation plan for the event, but the capacity of the area's transit and road infrastructure, combined with strict security, means residents and potential visitors need to have realistic expectations about how quickly they will be able to move around... People who live near the Arlington Cemetery Metro station, for example, and are planning to take the subway to the swearing-in ceremony might want to think about walking, because trains will be packed. On foot, the three-mile trek from the station to the Reflecting Pool at the Capitol should take about an hour.

inaugural 'last call' moved up
from washington post: D.C. bars and nightclubs will be allowed to serve alcohol until 4 a.m., not 5 a.m., during inauguration week after the D.C. Council voted last night to modestly scale back the emergency legislation it approved two weeks ago. Under the revised rules, nightlife establishments will still be allowed to remain open for food service round-the-clock from Jan. 17 to 21. However, they will have to pay a registration fee for each evening they intend to stay open past the normal hours of 2 a.m. on weekdays and 3 a.m. on weekends. Nightclubs will be required to pay $250 a night, and bars and restaurants will have to pay $100. The council initially extended the bar hours at the suggestion of the Restaurant Association of Metropolitan Washington, whose members want to capitalize on the expected crowds for President-elect Barack Obama's inauguration. But the move drew criticism from community leaders, religious organizations and Sens. Dianne Feinstein (D-Calif.) and Robert F. Bennett (R-Utah), who wrote a letter of protest to Mayor Adrian M. Fenty (D) and Vincent C. Gray (D), the council chairman.

US military mobilizes troops for inauguration
(editor's note: A sign of things to come? In years past the Secret Service and local law enforcement were responsible for protecting the president during the inauguration, now that duty has apparently shifted to the military and Northcom. It would seem Northcom is not enough, however - General Gene Renuart says an “integrated air defense system” including Canadians will “be up and robust and available.” Since when have Canadians been tasked with protecting the president during his swearing in? Canada and the U.S. signed an agreement that paved the way for the militaries from either nation to send troops across each other’s borders during an emergency. I guess we are to consider the inauguration of Obama an emergency?)

from afp: The US military plans to mobilize thousands of troops to protect Washington against potential terrorist attack during the inauguration of president-elect Barack Obama, a senior US military commander said Wednesday. They will fly combat air patrols and man air defenses, organize large scale medical support, and help local law enforcement provide security in the capital, said General Gene Renuart, head of the US Northern Command. "(It's) not because we see a specific threat, but because for an event this visible, this important and this historic, we ought to be prepared to respond if something does happen," he told reporters. Renuart said some 7,500 active duty troops and 4,000 national guard troops will take part in the operations in support of the inauguration of the 44th US president on January 20.

fbi informant: blagojevich was mob-connected bookie
from raw replay: The local ABC affiliate in Chicago has learned that a Chicago attorney told the FBI that Rod Blagojevich was a bookie that made regular payments to the Chicago mob during the 1980’s. Robert Cooley says that he told the FBI about wrongdoing by Blagojevich years ago. “When I was working with government wearing wire, I reported, I observed Rod, the present governor, who was running a gambling operation out in the western suburbs. He was paying street tax to the mob out there,” said Cooley. A spokesman for Blagojevich said he could not comment on Cooley’s allegations. ABC 7 has more details here. This video is from WLS-TV/DT Chicago, broadcast Dec. 17, 2008.

indicted governor finds jesus
from brasscheck tv: The Governor of Illinois recently got caught red handed trying to sell Barrack Obama's' recently vacated Senate seat. This whole "indicted politician finds Jesus" thing began back during Watergate. The crook who perfected this scam, Charles Colson, has made a profession of bringing Jesus to the powerful who are newly indicted.

greens worry obama will drop their cause
from washington times: Environmentalists fear their top priority - a national climate-change policy - will be sidetracked in Congress by concerns over the slumping economy. President-elect Barack Obama has said the policy is a "matter of urgency" and furthered his commitment on Monday by naming the top members of his energy and environment team. He said the team would lead his drive toward renewable energy and away from oil and would coordinate the often interlocked domains of energy and climate policy. Yet the green lobby, filled with optimism after the election of a Democratic president and Congress, now sees the expanding meltdown of the economy as a major obstacle.

'new rules' for obama’s civilian national security force
from world net daily: New rules published in the Federal Register would allow certain civilians to call American soldiers into action inside the U.S. to prevent environmental damage or respond to "special events" and "other domestic activities." The alarming warning is contained in proposed rules published last week for the Department of Defense's "Defense Support of Civil Authorities" plan.

cheney praises obama’s national security team
from abc: “I must say, I think it’s a pretty good team,” Cheney said. “I’m not close to Barack Obama, obviously, nor do I identify with him politically. He’s a liberal. I’m a conservative... But I think the idea of keeping Gates at Defense is excellent. I think Jim Jones will be very, very effective as the national security adviser.” 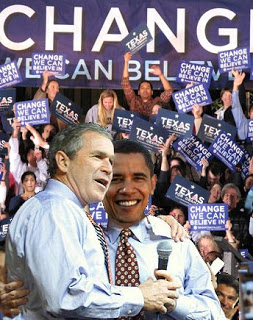 from nytimes: The White House has prepared more than a dozen contingency plans to help guide President-elect Barack Obama if an international crisis erupts in the opening days of his administration, part of an elaborate operation devised to smooth the first transition of power since Sept. 11, 2001.

The memorandums envision a variety of volatile possibilities, like a North Korean nuclear explosion, a cyberattack on American computer systems, a terrorist strike on United States facilities overseas or a fresh outbreak of instability in the Middle East, according to people briefed on them. Each then outlines options for Mr. Obama to consider.

The contingency planning goes beyond what other administrations have done, with President Bush and Mr. Obama vowing to work in tandem to ensure a more efficient transition in a time of war and terrorist threat. The commission that investigated the Sept. 11 attacks, noting problems during the handover from President Bill Clinton to Mr. Bush, called for a better process “since a catastrophic attack could occur with little or no notice,” as its report put it.

“This is very unusual,” said Roger Cressey, a former Clinton White House counterterrorism official who was held over under Mr. Bush. “We certainly did not do that. When the transition happened from Clinton to Bush, remember it was a totally different world. You had some documents given that gave them a flavor of where things were at. But now you’ve got two wars in Iraq and Afghanistan and a hot war against Al Qaeda.”

scotus won't review obama's eligibility to serve
from ap: The Supreme Court has turned down another challenge to Barack Obama's eligibility to serve as president because of his citizenship. The appeal by Cort Wrotnowski of Greenwich, Conn., was denied Monday without comment. Wrotnowski argued that Obama was a British subject at birth and therefore cannot meet the requirement for becoming president... At least two other appeals over Obama's citizenship remain at the court. Philip J. Berg of Lafayette Hill, Pa., argues that Obama was born in Kenya, not Hawaii as Obama says and Hawaii officials have confirmed. Federal courts in Pennsylvania have dismissed Berg's lawsuit. Federal courts in Ohio and Washington state have rejected similar lawsuits. Allegations raised on the Internet say the birth certificate, showing that Obama was born in Hawaii on Aug. 4, 1961, is a fake.

from kurt nimmo: It seems the Democrats are determined to reimpose the Fairness Doctrine. Earlier this week, Rep. Anna Eshoo (D-Calif.), a member of the House Energy and Commerce Committee, said she would work on bringing back the federal regulation. “I’ll work on bringing it back. I still believe in it,” Eshoo told the Daily Post in Palo Alto. Eshoo said she would recommend the doctrine be applied not only to radio and TV broadcasts, but also to cable and satellite services. “It should and will affect everyone,” she promised. “The so-called ‘Fairness Doctrine’ would restrict free speech on the public airwaves, stifling dissent at a time when an open national dialogue about our country’s future is essential,” House Republican Leader John Boehner (Ohio) said in response. “The American people do not believe the federal government should be in the business of dictating or restricting the content of political speech. I’m troubled by Rep. Eshoo’s comments, and my hope is that President-elect Obama will speak out against efforts by members of his party to use their majority power to limit free speech and dissent.”

obama names more cfr & goldman ghouls to top economic posts
from nytimes: Pledging to create “a 21st century regulatory framework” to protect against future financial crises, President-elect Barack Obama on Thursday nominated three veteran financial regulators to top economic positions in his administration. “We will crack down on this culture of greed and scheming that has led us to this day of reckoning,” Mr. Obama said in announcing the appointments at a news conference in Chicago. “We have been asleep at the switch.” Later in the day, transition aides said that Mr. Obama had settled on a labor secretary and trade representative and was likely to make those announcements on Friday at his final news conference before heading to Hawaii for a vacation. In the morning news conference, Mr. Obama named Mary L. Schapiro, 53, to head the Securities and Exchange Commission. The agency has come under sharp criticism for its failure to detect signs that major Wall Street banks were in trouble before the financial crisis, and more recently, for gaps in its oversight of the New York financier Bernard Madoff, who the authorities say has confessed to running a $50 billion Ponzi scheme. The Madoff scandal, Mr. Obama said, “reminds us yet again how badly reform is needed when it comes to regulations that govern our markets.” ... Mr. Obama also announced the selection of two former Clinton administration economic officials, Gary Gensler and Daniel K. Tarullo, to leading economic posts.

russia to test obama's mettle
from asd: The incoming US administration is to be given an assessment of its decisiveness by Moscow over missile issues, says arms negotiator. "The Russians intend to test the mettle of the new administration and the new president," said US Acting Undersecretary of State John Rood on Wednesday, AFP reported. The official made the remarks commenting on the recent Russian stance on the US plans for installation of a European-based missile defense apparatus. "In some ways their position is less flexible than it was before and, I think that therefore leads to me the conclusion that they would like to determine the posture of the new administration," he added.