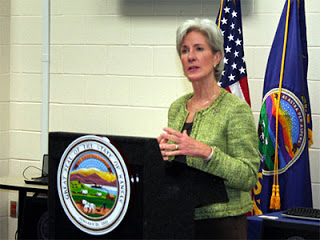 from infowars: Obama has picked a Bilderberger to be his choice for health secretary — Kansas Governor Kathleen Sebelius. Obama initially picked former Senate Democrat leader Tom Daschle for the position, but Daschle “withdrew because of personal tax issues,” in other words he didn’t bother to pay any taxes because minions of the elite are not required to do so, except for public relations reasons. Recall Sebelius, described as “a moderate Democrat,” was considered a leading candidate to be Obama’s vice presidential running mate last summer, but the elite picked CFR member Joe Biden instead. In June, 2008, Sebelius attended the 2008 Bilderberg meeting in Chantilly, Virginia, a fact not reported by the corporate media in her home state. She was included on the Official 2008 Bilderberg Participant List.

brzezinski's fear: class warfare & destruction of the new world order
from kurt nimmo: Making an appearance on the Morning Joe television show, the Rockefeller globalist Zbigniew Brzezinski said it is high time the rich who have made billions since the days of the Clinton administration help out the poor and struggling masses. Said Brzezinski: "Where is the monied class today? Why aren’t they doing something: the people who made billions, millions. I’m sort of thinking of Paulson, of Rubin. Why don’t they get together, and why don’t they organize a National Solidarity Fund in which they call on all of those who made these extraordinary amounts of money to kick some back in to [a] National Solidarity Fund?"

Brzezinski almost looked grandfatherly as he said this (see video). He almost came off as a good-natured humanitarian… almost. It all sounded good, if implausible — that is until Brzezinski reached the end of his carefully crafted diatribe: "And if we don’t get some sort of voluntary National Solidarity Fund, at some point there’ll be such political pressure that Congress will start getting in the act, there’s going to be growing conflict between the classes and if people are unemployed and really hurting, hell, there could be even riots."

In other words, Brzezinski is afraid that if some filthy lucre is not dispensed among the unwashed, they will rise up and burn down the banks, sack the corporations, and destroy the globalist edifice so painfully erected over the last fifty or so years — and maybe even go so far as to string up Brzezinski and his fellow globalists from trees and overpasses, the sort of dirty and regrettable business that invariably occurs in the process of violent revolutions in response to decades of provocation.

napolitano orders review of homeland security (and their terror drills)

rahm’s ethics & tax problem
from nypost: News broke last week that Rahm Emanuel, now White House chief of staff, lived rent-free for years in the home of Rep. Rosa De Lauro (D-Conn.) - and failed to disclose the gift, as congressional ethics rules mandate. But this is only the tip of Emanuel's previously undislosed ethics problems. One issue is the work Emanuel tossed the way of De Lauro's husband. But the bigger one goes back to Emanuel's days on the board of now-bankrupt mortgage giant Freddie Mac. Emanuel is a multimillionaire, but lived for the last five years for free in the tony Capitol Hill townhouse owned by De Lauro and her husband, Democratic pollster Stan Greenberg... Now Rahm Emanuel is in the White House helping President Obama dig out of the mess that Freddie Mac helped start. The president's chief of staff isn't subject to Senate confirmation, but his ethics still matter. Is this the change that we can depend on?

from chicago sun-times: While the Obama White House is searching for a replacement for health czar Tom Daschle, policy work on health care reform--a priority for the administration--Is ongoing with one key advisor especially well connected. The brother of White House Chief of Staff Rahm Emanuel, Dr. Ezekiel J. Emanuel, a noted bioethicist, is advising the Obama administration on health care reform. Dr. Emanuel is the Chair of the Department of Bioethics at The Clinical Center of the National Institutes of Health and a breast oncologist.

obama prescreens reporters at press conference
from wsj: About half-way through President Obama's press conference Monday night, he had an unscripted question of his own. "All, Chuck Todd," the President said, referring to NBC's White House correspondent. "Where's Chuck?" He had the same strange question about Fox News's Major Garrett: "Where's Major?" The problem wasn't the lighting in the East Room. The President was running down a list of reporters preselected to ask questions. The White House had decided in advance who would be allowed to question the President and who was left out. Presidents are free to conduct press conferences however they like, but the decision to preselect questioners is an odd one, especially for a White House famously pledged to openness. We doubt that President Bush, who was notorious for being parsimonious with follow-ups, would have gotten away with prescreening his interlocutors. Mr. Obama can more than handle his own, so our guess is that this is an attempt to discipline reporters who aren't White House favorites. Few accounts of Monday night's event even mentioned the curious fact that the White House had picked its speakers in advance. We hope that omission wasn't out of fear of being left off the list the next time.