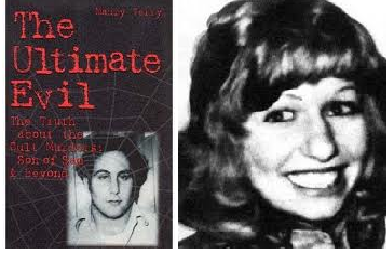 William Ramsey details in masterful fashion occult aspects of a young wife’s ritual murder in blog, “1974 Satanic Ritual Murder Still Unresolved.” “On October 13th, 1974, Arlis Perry, a nineteen-year-old from Bismarck, North Dakota, was found murdered in the Memorial Church on the Stanford university campus. She had been in California for only six weeks… I heard a rumor that her murderer(s) actually laid her body on the central altar of the church, but that the authorities had her body moved to another location in order to maintain the sanctity of the church.Found on her back, naked from the waist down with her legs spread wide apart, her pants were carefully placed over her legs to form oppositional, triangular shapes.”

“Perry’s blouse was ripped open and her hands held a votive candle folded across her chest. Horrifically, another votive candle protruded from her vagina. Evidence indicated she was beaten, then choked. The savage blow of an ice pick behind her left ear caused her death. Its handle was seen protruding from her skull when a security guard found her body. The presence of the ice pick at the scene indicates premeditation—the murderer brought the unusual weapon to the church with the intent to kill. Horrified and shocked by the crime, the local authorities kept the occult signatures of the murder from the public. Initially, local police believed a local sexual psychopath committed the killing. Santa Clara detectives knew that personal possessions of Arlis Perry were removed from the murder scene as either souvenirs or proof that the murder occurred,” informs Ramsey.

The story gets better, when it’s known author Maury Terry came across a tie to David Berkowitz and “Son of Sam” murders circa 1976-1977 in New York City, while researching seminal work, “The Ultimate Evil.” Ramsey writes, “Known as the “Son of Sam” murders, six people were killed and seven more injured, allegedly by David Berkowitz. At the time of his arrest, Berkowitz admitted the killings, but in the mid-90’s he claimed that the murders were ritual murders committed by a cult…Berkowitz believed he knew who murdered Arliss Perry, but never provided an exact name. The Son of Sam called the murderer Manson II, who belonged to a cult in California that killed often.”

Another occult signature is the date, “Arlis Perry was murdered on October 12th, a day which was also the birthday of black magician Aleister Crowley. Berkowitz had already tagged Crowley as an inspiration for his cult. Followers of Crowley, also known as Thelemites, revere October 12th as a holy day and refer to it as Crowleymas,” informs Ramsey.

A final note is the absence of any effective investigation or successful prosecution. Are Satanic crimes protected because of their ties to those in authority? Ramsey curiously adds note as an aside, “Perry’s husband Bruce Perry behaved suspiciously. He had blood on his shirt when he was interrogated but claimed it was from a nose bleed. He later became a psychiatrist and campaigned against ‘Satanic panic.’ … People should stay away from Satanists lest they are chosen for such sacrifices.“