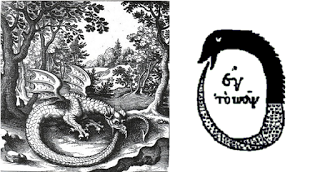 Dragon.org provides answer to title, "What IS the Ouroboros?" "The ouroboros has several meanings interwoven into it. Foremost is the symbolism of the serpent biting, devouring, eating its own tail [picture, left]. This symbolises the cyclic Nature of the Universe: creation out of destruction, Life out of Death. The ouroboros eats its own tail to sustain its life, in an eternal cycle of renewal. In the ... drawing [picture, right], from a book by an early Alchemist, Cleopatra, the black half symbolises the Night, Earth, and the destruc- tive force of nature, yin. the light half represents Day, Heaven, the generative, creative force, yang. Alchemically, the ouroboros is also used as a purifying glyp," informs webpage.  The symbol of the Serpent biting its own tail  "...is first seen as early as 1600 years BC in Egypt. From there it moved to the Phonecians and then to the Greeks, who called it the Ouroboros, which means devouring its tail. The serpent biting its tail is found in other mythoi as well, including Norse myth, where the serpent's name is Jörmungandr, and in Hindu, where the dragon circles the tortoise which supports the four elephants that carry the world."