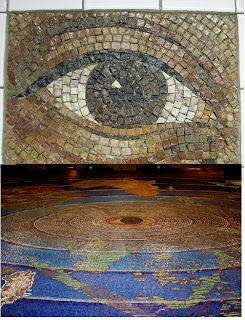 Oculus, The All Seeing Eye Below Ground Zero

You don't have to travel to New York City to tour its occult art.  Artwork entitled "Oculus (Eye)" can be found all over Chambers Street/World Trade Center subway station.  A 2009 article by David J Stewart, "Oculus, The All Seeing Eye Below Ground Zero," advises:  "Beneath the Chambers Street / World Trade Center subway stop in New York City, lies an occult symbol that millions of Americans have looked upon without noticing it’s inherently Satanic overtones. This Satanic symbol is known as Oculus."  The artwork "...consists of 300 different mosaic eyes, all based upon actual human eyes taken from photographs–not computer generated.  The centerpiece of the work is an elliptical glass and stone mosaic floor, with a magnificent micro mosaic eye at the center of an ultramarine vortex with the image of the City of New York woven into the picture [picture, bottom]. The Cult of Oc: is derived from the ancient symbols of the circular sun and the crescent moon, which when joined together form the word oc." The article continues with full import of "The All Seeing Eye" below.


"It is not hard to understand that there is indeed a very real satanic power represented by this mosaic and it’s all seeing eye, yes, the same all seeing eye depicted on the back of your dollar bill ...and as such is also the reversed side of America’s Great Seal of which famed occultist Manly. P Hall writes, 'On the reverse of our nation’s Great Seal is an unfinished pyramid to represent human society itself, imperfect and incomplete. Above floats the symbol of the esoteric orders, the radiant triangle with its all-seeing eye. … There is only one possible origin for these symbols, and that is the secret societies which came to this country 150 years before the Revolutionary War. … There can be no question that the great seal was directly inspired by these orders of the human Quest, and that it set forth the purpose for this nation.'"

"As for grasping...the all seeing eye, one needs to go back into ancient Egypt and to Osirus and Horus, both of whom are represented by the eye. The myth described Osiris as having been killed by his brother Seth who wanted Osiris’ throne. Isis briefly brought Osiris back to life by use of a spell that she learned from her father. This spell gave her time to become pregnant by Osiris before he again died. Isis later gave birth to Horus. As such, since Horus was born after Osiris’ resurrection, Horus became thought of as representing new beginnings. This combination, Osiris-Horus, was therefore a life-death-rebirth deity, and thus associated with the new harvest each year. The gods were impressed by the devotion of Isis and thus restored Osiris to life in the form of a different kind of existence as the god of the underworld. Wow, God of the Underworld! Imagine that! Ironically, that’s a title also viewed as Satan’s."

The present writer is just a common person not versed in the occult and their beliefs, I still find it difficult to fathom how others seek power over their fellow man through rituals.  Yet, even more amazing, phenomena such as the World Trade Center on 9/11 that seems to resemble a large public ritual all the more as time passes by!

The article concludes with astonished revelation: "The links are clear and the fact that Oculus is located below ground zero is more than just bizarre. It raises the question, were those that lost their lives on 911 part of a ritual sacrifice to an ancient and evil deity known as the Serpent or the Devil?"