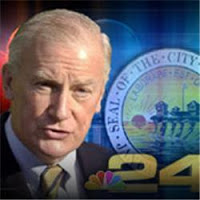 mayor kicks marines out of toledo

from wnwo: Mayor Carty Finkbeiner on Friday ordered some 200 members of Company A, 1st Battalion, 24th Marines from Grand Rapids, Michigan, out of Toledo just before the unit was supposed to start a weekend of urban warfare training downtown. The mayor’s spokesperson, Brian Schwartz said, "The mayor asked them to leave because they frighten people. He did not want them practicing and drilling in a highly visible area."

mayor kicks marines out of toledo
from ap: They were gone but not forgotten. A day after Mayor Carty Finkbeiner ordered 200 Marine Corps Reservists out of downtown Toledo, residents here and elsewhere expressed disappointment, disbelief, and even outrage. His last-minute call Friday resulted in the unit canceling its planned training exercises and returning to Grand Rapids, Mich.

mayor draws fire for booting marines
from ap: Turning away a squad of Marine Corps reservists planning a weekend of training downtown has put the city's mayor in the crossfire of veterans. Even some supporters wonder what he was thinking... "I'm shaking I'm so upset," said Ron Hernandez, a former Marine who served in Vietnam. "It's a slap in the face."

from steve watson: The Mayor of Toledo, Ohio has been castigated by the mainstream media for taking the decision to order 200 Michigan based Marines out of his town just before the unit was supposed to start a weekend of urban warfare training downtown.