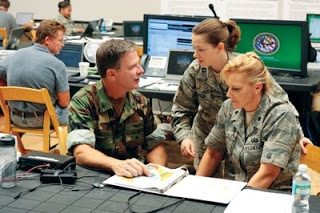 The "Vibrant Response" exercise will be conducted by the Chemical, Biological, Radiological, Nuclear and High-Yield Explosive, or CBRNE Joint Response Force, through Aug. 14.

"It's going to be extremely complex and require a tremendous amount of coordination with other agencies and locals at various levels," said Maj. Gen. John Basilica, commander of Operational Command Post 1, U.S. Army North. "It is all designed to test and challenge the headquarters and command in control elements to make sure they can work together to respond quickly, because speed is the most important piece of this."

The service members will be given a situation in which they will be testing communication capabilities and reactions. Participants will be role-playing as certain pubic figures, like mayor and governor, in one scenario.

The exercise will involve about 400 to 500 people at Fort Leavenworth, Kan. The two divisions will each train one week, in succession with one another. Each CCMRF unit contains three task forces - medical, operations and aviation, in addition to smaller elements with specific technical expertise. The Operation Task Force 2/18 MEB from South Carolina, Medical Task Force 3/30 MEB from Illinois, and Aviation Task Force 11 from Kentucky will all participate in the exercise.

"We don't get that many opportunities to provide these specific headquarters together and train in a command-post type exercise," Basilica said.

The CBRNE was transferred to U.S. Northern Command's Joint Task Force Civil Support in October 2002. JTF-CS provides support from active, Guard and Reserve members, and civilians, who are all commanded by a National Guard general officer.

CBRNE is designed to work with federal agencies like the Federal Emergency Management Agency and Center for Disease Control, to aid, restore and prevent casualties in instances of major disaster.

The CCRMF is only used after all local, state and federal resources have been exhausted, Basilica and Collins said.

"We hope to God that there are no terrorist attacks or no major industrial accident in the U.S. where the city, state or federal government might ask for additional capabilities. We hope that does not happen, but if it does, I think it's a great story for the nation that you have these multiple CCMRF forces that would be trained and ready to step in and assist the states if they ask for extra help," Collins said.