one quarter of US grain crops fed to cars – not people 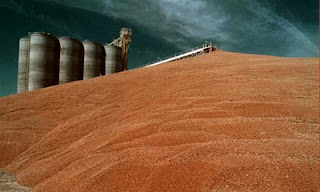 from guardian: One-quarter of all the maize and other grain crops grown in the US now ends up as biofuel in cars rather than being used to feed people, according to new analysis which suggests that the biofuel revolution launched by former President George Bush in 2007 is impacting on world food supplies.

The 2009 figures from the US Department of Agriculture shows ethanol production rising to record levels driven by farm subsidies and laws which require vehicles to use increasing amounts of biofuels.

"The grain grown to produce fuel in the US [in 2009] was enough to feed 330 million people for one year at average world consumption levels," said Lester Brown, the director of the Earth Policy Institute, a Washington think tank that conducted the analysis.