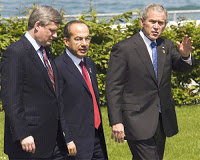 from afp: Protesters will be “seen and heard” when North American leaders meet next week in Montebello, near Ottawa, but only virtually – via an audio-video feed set up by organizers. And the heads of the United States, Canada and Mexico may opt to change the channel.

The arrangement is “in compliance with (a Canadian) court’s decision that protesters have a right to be ‘seen and heard,'” said Sandra Buckler, a spokeswoman for host Stephen Harper, the prime minister of Canada.

However, the novel plan to give protesters a voice, while maintaining strict security for the talks, has riled protesters being kept out by a fence, three meters (10 feet) high and 2.5-kilometers (1.5 miles) around the meeting place.

“It’s a travesty of democracy,” Sophie Shoen of People’s Global Action told Agence France-Presse. “We must be allowed to directly confront political leaders where and when we choose, not virtually.”

The hundreds of demonstrators expected to try to disrupt the summit “must be able to make their protests heard by the leaders they are addressing,” echoed Grace Pastine, of the B.C. Civil Liberties Association, in a statement.

“They must be allowed to protest in Montebello,” a luxury log-cabin hotel nestled in a lush forest between Ottawa and Montreal, she said.

In defiance, several anti-globalization groups said they planned to try to get as close to the meeting site as possible, refusing to be “caged” in a forest clearing set up for them by summit organizers.

Activists, labor groups, academics and opposition politicians are decrying the Security and Prosperity Partnership (SPP), a framework for greater trade and security integration of Canada, the United States and Mexico.