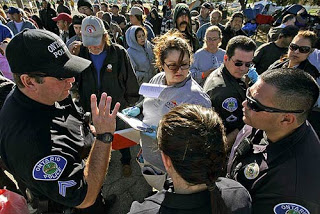 from latimes: Tent City residents gather as the city of Ontario starts the process of sorting out who may stay and who must leave... The aim is to reduce the number of people living there from over 400 to 170... Officials begin thinning out the encampment, saying the city can provide space only for those who once lived there and can prove it... Dozens of Ontario police and code enforcement officers descended upon the homeless encampment known as Tent City early Monday, separating those who could stay from those to be evicted. Large, often confused, crowds formed ragged lines behind police barricades where officers handed out color-coded wristbands. Blue meant they were from Ontario and could remain. Orange indicated they had to provide more proof to avoid ejection, and white meant they had a week to leave.