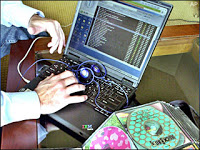 from computerworld: Oregon is fast becoming Ground Zero in the contentious battle between the Recording Industry Association of America (RIAA) and the tens of thousands of consumers it accuses of illegal music sharing.

The state Attorney General‘s office this week filed an appeal in U.S. District Court in Oregon calling for an immediate investigation of the evidence presented by the RIAA when it subpoenaed the identities of 17 students at the University of Oregon who allegedly infringed music copyrights. It is the second time in a month that Oregon Attorney General Hardy Myers has resisted attempts by the RIAA to force the university to turn over the names of individuals it says shared music illegally.

Officials at the RIAA could not immediately be reached for comment.

“It is a really huge step when the head law enforcement officer of a state wants to investigate the RIAA’s evidence-gathering techniques,” said Ray Beckerman, a New York-based lawyer who has been defending individuals in RIAA lawsuits.