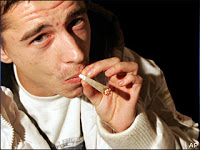 from katu: Relax it and tax it. That's the motto behind a new cannabis initiative that would allow Oregon's state-controlled liquor stores to legally sell marijuana to adults.

Initiative backers said their plan would send 90 percent of the proceeds from the state's sale of marijuana to Oregon's General Fund, which could lower Oregonians' state tax burden.

The initiative would also legalize the growing of hemp, a non-drug variant of cannabis that can be used to make industrial-strength fibers and bio-fuels.

Paul Stanford of the Oregon Cannabis Tax Act said the measure would also put a dent in illegal dealing of the weed.

"We want to take marijuana out of the hands of children and substance abusers, who control the market today, and put it in the hands of the state's liquor control commission and the age limit of 21 will be strictly enforced," Stanford said at a press briefing.

Supporters have two years to collect nearly 83,000 signatures to get the measure on the November ballot in 2010.