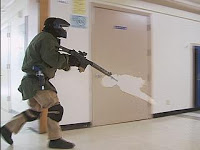 oregon police terrorize children in the name of safety

from thought criminal: I found this absolutely disgusting. These children learned nothing from this except how to flop on the ground and grovel. These police officers are using aggressive behavioral modification techniques. Changing how kids behave around handguns or rifles. Essentially they are training them to be snitches for the police department. They will be fearful of legitimate firearms. While Bush is using 9/11 to keep Americans petrified, police departments across the country are using the Columbine and Virginia Tech shootings to run psychological operations on school kids.

from kval: For students, fire drills and earthquake drills are simply the norm, but on Wednesday, in a sign of the times, students in Albany took part in a school shooting drill that was very intense.

This may have been only a drill, but it's just about as real as it gets.

"Basically, the weaponry is the same weapon we carry on duty," said Albany Police Sgt. Travis Giboney. "However, they use a marking cartridge: kind of like a paintball, except it's a gas-driven paint pellet."

Two counties' worth of law enforcement, and a couple of dozen student volunteers, took part in this active shooter drill at West Albany High on Wednesday.

"It's kind of scary at first," says sophomore Matt Groshong. "You can even feel the gun when it goes off, and when it hits, when the bullets hit, it's all so realistic, it's just weird."

There are many unknowns, but one thing's for certain -- there's at least one shooter on a rampage.

As law enforcement heads into a situation, the kids who are playing the roles know what they're doing, and the bad guys also know what's going on. But these guys don't know what to expect. In that sense, it's the same feeling they'd have if they walked into an active shooter situation.

The bullets are replaced with paint, and the good guys always win, but the cops and the kids say they're better prepared for the worst.

"I don't think people think about it happening at their school, because they're like, oh, that doesn't happen here," said sophomore Jake Blecker. "But I mean, potentially it could happen anywhere, and so it kind of gives you an experience of what it would be like and how scary it would actually be."

There are about 100 law enforcement officials from Linn and Benton Counties taking part in the training, which continues through Thursday. Officials debrief each group after their simulations to talk about what they've learned, and how to improve.