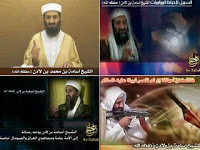 osama/cia psyop setting up something

al-qaeda supporters' tape to call for use of wmd's

from abc: Intelligence and law enforcement sources tell ABC News they are expecting al Qaeda supporters will post a new video on the Internet in the next 24 hours, calling for what one source said is "jihadists to use biological, chemical and nuclear weapons to attack the West."

cia predicts al-qaeda 'succession crisis' after bin laden
(translation: "just because we might thaw bin laden's corpse & roll 'em out for an october surprise doesn't mean the global war of terror will stop.")

from ap: The U.S. is making "a big and continual push" to capture or kill al-Qaeda leader Osama bin Laden, but his demise won't end the organization's menace, CIA Director Michael Hayden said Tuesday in an Associated Press interview. The CIA is equally interested in those jockeying to replace bin Laden in what he predicted will be a "succession crisis."

and if you believe any of this, bin laden's brother has a bridge to sell you...

update2: abc & fbi punk'd by terror 'fan video'
from danger room: On Tuesday, ABC News posted a story headlined "Al-Qaeda Tape to Call for Use of WMDs." Which would be awfully scary -- if it were true... Or maybe not. The video was actually released on Monday Sunday. And while it is called ''Nuclear Jihad, The Ultimate Terror," it is not from Al-Qaeda -- or any other major terrorist group. Rather, it is "a jihadi supporter video compilation," notes Ben Venzke with IntelCenter -- a flick "made by fans or supporters who may not have ever had any contact with a real terrorist." ... Looks like the video and a partial translation are here.

from spectator: The Dubai-based satellite TV channel Al Arabiya is reporting that Osama Bin Laden has been “located” by US intelligence in the Kararakoram – a mountain range that spans the borders of Pakistan, the Kashmir and China (K2 is one of its peaks). There was a high-level meeting last week in Doha including General Petraeus, the recently-nominated Commander of US Central Command, and it is reasonable to speculate that – if there is truth to the report – it flows from this piece of intelligence. Whether the latest rumours about the tracking down of OBL have foundation will quickly become apparent. If they do have substance, Al Arabiya will have scored a huge world scoop – and have its rival Al Jazeera spitting nails.