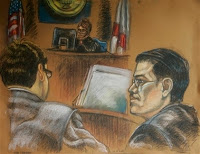 from ap: Jose Padilla was convicted of federal terrorism support charges Thursday after being held for 3 1/2 years as an enemy combatant in a case that came to symbolize the Bush administration’s zeal to stop homegrown terror.

Padilla, a U.S. citizen from Chicago, was once accused of being part of an al-Qaida plot to detonate a radioactive “dirty bomb” in the U.S., but those allegations were not part of his trial.

Padilla, 36, and his foreign-born co-defendants, Adham Amin Hassoun and Kifah Wael Jayyousi, were convicted of conspiracy to murder, kidnap and maim people overseas, which carries a penalty of life in prison. All three were also convicted of two terrorism material support counts, which carry potential 15-year sentences each.

Jurors deliberated a day and a half after a three-month trial. U.S. District Judge Marcia Cooke set a Dec. 5 sentencing date.

The three were accused of being part of a North American support cell that provided supplies, money and recruits to groups of Islamic extremists. The defense contended they were trying to help persecuted Muslims in war zones with relief and humanitarian aid.

The White House thanked the jury for a “just” verdict.