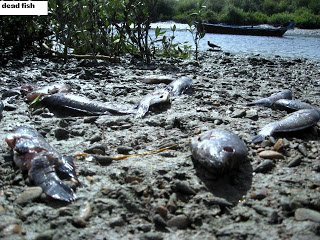 from sott.com: Another case of fish mortality, mainly consisting of grey mullets
surfaced within Karachi Port extending between Bab Island and Chinna
Creek. This is the second such case in the month of August 2013, in which a huge quantity fish have died.

This mortality was attributed to pollution brought in by rain water
flowing through Sindh Industrial Trading Estate (SITE) and laden with
toxic chemicals when entered Karachi Harbour. It is estimated that about
100 m. tons fish have died.

During the present event of mortality, small quantity of fishes have
died and beached in patches along Clifton beach since day before
yesterday. Tiger tooth croaker, John croaker, mullets, terapons, scat,
sea breams and other small fishes inhabiting open coastal waters along
Clifton were observed to have been affected.

The mortality is attributed to red tide, a phenomenon which occurred due
to abrupt an immense growth of small sized plant which is found in the
sea. The reason for inducing sudden increase in this toxic plant
(collectively known as phytoplankton) is not well understood.

Rab Nawaz, Director, WWF-Pakistan has pointed out
the recurring of mortality may affect the livelihood of the fishermen of
the coastal area. Mortality on account of toxic phytoplankton can be
wide spread and direct or indirect consumption of such dead fishes can
be harmful for human being as well. He further informed that
WWF-Pakistan has collected the samples of fishes to get them analysed
and identify the species of phytoplankton which was the cause of the
present mortality.

Muhammad Moazaam Khan, Technical Advisor (Marine Fisheries) WWF-Pakistan
informed that abrupt and immense growth of phytoplankton is known as
"Harmful Algal Bloom" (HAB) or "Red tide". Phytoplankton are not harmful
to human being and marine animals. However, because of a number of
reasons some of which are still not well understood, these microscopic
algae grow in million resulting in change in colour of the water which
may range from green to blood red. Locally known as mara paani (in Sindhi) and bad aab (in Balochi) is a phenomenon of regular occurrence in Pakistan sometime resulting in mortality of fishes.

Khalid Mahmood, Co-Principal Investigator and Saba Ayub, Data Enumerator
of WWF - Pakistan who surveyed the area pointed out that mortality of
the fishes is widespread along entire Clifton coast mainly in Do Darya
and Sea View but the quantities are not large. Most of the dead fishes
have already been collected for fish meal processors.

Muhammad Moazzam Khan showed concern on use of dead fish on account of
toxic bloom for fish meal and direct human consumption can lead to
serious health issue. He further pointed out that WWF-Pakistan is
working with National Institute of Oceanography to identify the species
of phytoplankton responsible for mortality of fishes.