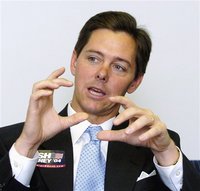 from apnews/myway: Republican activists Grover Norquist and Ralph Reed landed more than 100 meetings inside the Bush White House, according to documents released Wednesday that provide the first official accounting of the access and influence the two presidential allies have enjoyed.

The White House released the Secret Service visit records to settle a lawsuit by the Democratic Party and an ethics watchdog group seeking visitors logs for the two GOP strategists and others who emerged as figures in the Jack Abramoff lobbying scandal.

Earlier this month, the White House suggested to the judge in that lawsuit that such records need not be disclosed because the information was privileged and might reveal how Bush and his staff get private advice, according to court documents obtained by The Associated Press.