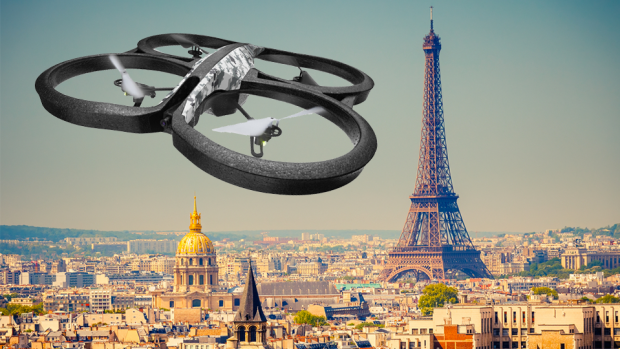 Paris Has A Drone Problem

from theverge.com: Police in Paris yesterday detained
three Al Jazeera journalists on charges of flying a drone without a
license, marking the latest development in what's been a bizarre week
for a city still reeling from last month's terrorist attacks. The
arrests come amid growing anxiety surrounding unauthorized drones, or
unmanned aerial vehicles (UAVs), which have been seen hovering above
popular tourist sites and government buildings in recent weeks.

For two consecutive nights this week, small, non-military drones were spotted
above some of Paris’ most famous landmarks, including the Eiffel Tower
and the Invalides military museum, as well as the US embassy and major
traffic junctions along the city's border. At least five drones were
reported by witnesses and police each night, but their operators have
yet to be identified. Paris police obtained video footage of some of the
drones Tuesday night and are studying it as part of the ongoing
investigation. At this point, it's unclear whether the drones were flown
as a prank, a harmless flyover, or part of a coordinated or sinister
operation, but French authorities are taking no chances.

"There's no need to worry, but we should be vigilant," government spokesman Stephane Le Foll told reporters Wednesday. "It's a subject being taken very seriously."

The journalists arrested Wednesday don’t appear to be linked to the drones seen overnight Monday and Tuesday. In a statement to The Guardian,
an Al Jazeera spokesman said the journalists were actually filming a
report on the drones seen earlier in the week. The journalist who
operated the drone will appear in court next week, while the other two have been freed.