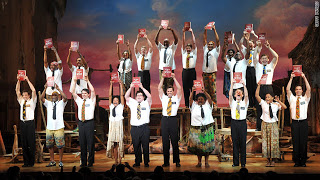 from beliefnet: The irreverent and hilarious The Book of Mormon musical dominated the 65th annual Tony Awards on Sunday (June 12), winning the award for Best Musical and becoming one of the most honored productions in Broadway history.

Broadway neophytes Trey Parker and Matt Stone thanked their South Park fans and the audiences who are packing the show. “You guys made this show what it is,” Parker said. “And therefore, you’re going to have to atone for it one day.” He went on to jokingly thank the “co-writer who passed away. Mr. Joseph Smith, the founder of the Mormon religion. He couldn’t be here tonight, but — you did it, Joseph! You got the Tony!”

The three-hour ceremony served as a buildup to the foregone conclusion that the boisterous, profane and, yes, surprisingly sweet production would win the big award. The Book of Mormon won nine Tonys after receiving 14 nominations. Only The Producers (12) and South Pacific (10) have taken home more Tonys, officially known as the Antoinette Perry Awards for Excellence in Theatre.

The Book of Mormon was written by South Park co-creators Parker and Stone, who created South Park, and Robert Lopez, co-creator of the irreverent, Tony-winning musical Avenue Q. Nikki M. James, who won as Best Featured Actress in a Musical for her role as Nabalungi, thanked Parker, Stone and Lopez “for writing the most incredible show, the funniest and most beautiful, heartfelt musical that’s changing the face of American musical theater.”