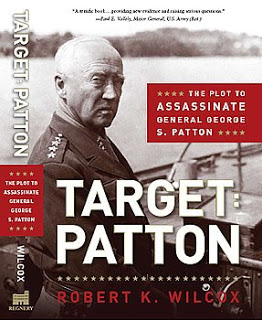 patton assassinated to silence his criticism of allied war leaders

from telegraph: The newly unearthed diaries of a colourful assassin for the wartime Office of Strategic Services (OSS), the forerunner of the CIA, reveal that American spy chiefs wanted Patton dead because he was threatening to expose allied collusion with the Russians that cost American lives.

The death of General Patton in December 1945, is one of the enduring mysteries of the war era. Although he had suffered serious injuries in a car crash in Manheim, he was thought to be recovering and was on the verge of flying home.

His book, "Target Patton", contains interviews with Mr Bazata, who died in 1999, and extracts from his diaries, detailing how he staged the car crash by getting a troop truck to plough into Patton's Cadillac and then shot the general with a low-velocity projectile, which broke his neck while his fellow passengers escaped without a scratch.

Mr Bazata also suggested that when Patton began to recover from his injuries, US officials turned a blind eye as agents of the NKVD, the forerunner of the KGB, poisoned the general.

Mr Wilcox told The Sunday Telegraph that when he spoke to Mr Bazata: "He was struggling with himself, all these killings he had done. He confessed to me that he had caused the accident, that he was ordered to do so by Wild Bill Donovan.