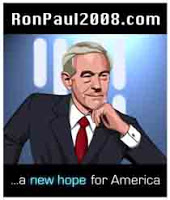 from raw story: Ron Paul's Republican presidential campaign raised $2.4 million in the second quarter of this year and currently has that much money in the bank, topping onetime-frontrunner John McCain's $2 million cash on hand, ABC News reported.

The campaign's most recent haul is nearly quadruple its first quarter fundraising total, which the campaign attributes to Paul's explosive success online.

Paul's YouTube channel has 2.1 million page views -- three times the number of the next closest Republican, Mitt Romney, who has 700,000, The Hill reported. And the Texas Congressman has more than 41,000 MySpace friends.

"I think some candidates are on the down-slope, and we're on the up-slope," Paul said, referring to McCain, in an interview with George Stephanopoulos to be aired Sunday on ABC's "This Week."

Paul's campaign has not said how much of its donations were raised online this quarter. A campaign spokesman did not immediately respond to RAW STORY's request for comment Friday.

McCain has far out-raised Paul this year, with a total haul of $24 million including $11.2 million in the last three months. But McCain also has a much larger campaign infrastructure to maintain, which has eaten up much of the campaign's cash so far. The Arizona Senator's campaign manager will be working without a paycheck for the next few months and dozens of staffers have been laid off as part of a campaign restructuring, campaign advisers said in a conference call with reporters this week.

The McCain campaign did not immediately return a call seeking comment Friday.

Republican frontrunners Rudy Giuliani and Romney have $18 million and $12 million in the bank, respectively.

update: ron paul on the tucker carlson show, july 11
from youtube: Ron Paul talks about how he raised more money than McCain and how the momentum of his campaign is growing at a breakneck speed.