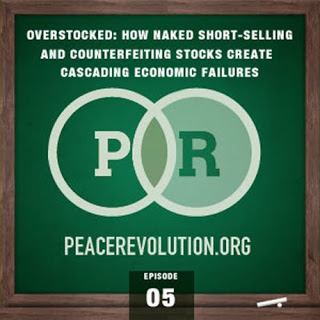 from peace revolution: What happens when you take a doctor of philosophy who's the CEO of an $800 million dollar company - and make him a victim of naked short selling and Wall Street fraud - and put him together with a Wall Street whistle-blower who was on the inside selling the so-called "compliance" software used to hide the evidence of these crimes against humanity?

Sit back and hold on because if you thought discussing Wall Street and finance was boring, you're about to have your mind blown wide open. This is it folks. This is how the whole scam works - from top to bottom.

Beginning in 2005, Byrne become known for his campaign against naked short selling, a practice which he says has been used in violation of securities law to hurt the price of his and other companies' stock. Under his direction, Overstock.com has filed two lawsuits alleging improper acts by Wall Street firms, a hedge fund, and an independent research firm.


As a prerequisite to this interview, it's highly recommended that you visit Gnostic Media’s podcast and listen to episodes 49 and 50 on the Trivium Method of Thinking Critically (the format used to formulate the questions in this interview) with Gene Odening, and episode #62 with Dr. Michael Lobossiere on logical fallacies. The application of the 7 liberal arts is discussed throughout this current interview.

Also referenced in this episode is Jan’s interview via Gnostic Media’s Podcast #16 with Dr. John Loftus - the former top US Justice Dept. Prosecutor under the Carter and Reagan administrations. In that interview we discuss the US creation of al-Qaeda and the Muslim Brotherhood. http://premium.gnosticmedia.podomatic.com/entry/2009-02-01T23_49_41-08_00