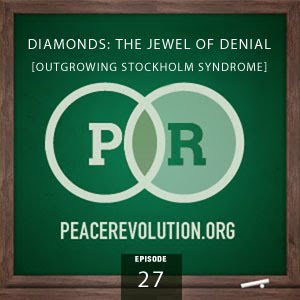 1. Introduction Video & Invitation to the Tragedy and Hope online community
2. Peace Revolution primary site (2009-2011)
3. Peace Revolution backup (2006-2011)
4. (video) Jewel of the Nile (1985) trailer
5. (video) Diamonds are Forever (1971) trailer
6. (video) The Diamond Empire (1995) PBS
7. (video) Blood Diamonds: True Story
8. (video) Diamonds of War
9. (video) Dr. Steve Pieczenik:
bin Laden worked for CIA, MI6 & Mossad
10. (video) Invisible Empire
11. (video) “Shine on You Crazy Diamond” by Pink Floyd on YouTube
12. (article) “Al Qaeda Cash Tied to Diamond Trade” / Washington Post
13. (article) “Bin Laden is financed by ‘blood diamonds’ from Sierra Leone / Millions reaped from gems sold by rebel groups” / SFGate.com
14. (article) “How cut-price diamonds are traded for weapons” / London Telegraph
15. (article) “Board member of a diamond business is accused of funding bin Laden” / JCK Industry Authority
16. Cecil Rhodes / Wikipedia
17. De Beers Diamond Cartel / Wikipedia
a. Note it cites N.M. Rothschild and Sons as Rhodes’ financiers.
18. (book) Glitter and Greed: The Truth about Blood Diamonds, by Janine Roberts
19. Cecil Rhodes set up the De Beers Diamond Cartel
20. Rhodes’ will created the Rhodes Scholarships and CFR
21. Rhodes secret society was based on the military strategy of the Jesuits
a. Search “Jesuit” and “Jesuits” in the e-book version as linked
22. Rhodes was a freemason
23. Freemasonry was infiltrated by the Illuminati, and the Illuminati strategy is also based on the military strategy of the Jesuits.
24. Moses Hess writes in 1862 that illuminists were progressing their agenda to create Israel in Palestine, from within the freemasonic lodges.
a. Search “Freemason” “Israel” “Palestine” “Rothschild” “Hirsch”
b. Originally published by Moses Hess in 1862, even though 1918 Harvard Library Edition is linked above
25. Rothschild is mentioned in Hess’s 1862 publication as being a key participant.
a. Search “Rothschild” in the full-text version as linked
26. Rothschild funds Cecil Rhodes
27. Rothschild is named in an early version of Rhodes will.
28. Rothschild is instrumental in the Balfour Declaration and therefore, the creation of Israel.
a. Israel is likewise based on the military strategy of the Jesuits.
29. There is an intimate connection between British South Africa and Israel
a. According to Theodor Herzl’s diaries, Herzl states that Israel must be based on Rhodes’ plan, as per his letters and correspondence with Cecil Rhodes.
30. Also ongoing in Africa, were other Empires trying to likewise rape the native people of their natural resources, including King Leopold of Belgium, the Prussian Hapsburg Family, as well as Rhodes’ diamond cartel; all of which had dealings with the Rothschild family franchise banks. Call it racism, eugenics, or greed; it’s all part of the history of the biocratic Utopians.
a. See also: “The First Holocaust: Horrifying Secrets of Germany’s earliest genocide inside Africa’s Forbidden Zone” by the UK Mail Online
31. Among the imperial financiers participating in the diamond cartel in the early 19th century, was Augustus Belmont, who like many who helped to create the Federal Reserve Bank in 1913, was also part of the American International Corporation, which funded the Soviet Union.
32. (video) Conflict Diamonds by Lupe Fiasco

previous: episode026 –
peace revolution: episode026 – exposing the folly of an american theatre of the absurd:

One response to “peace revolution: episode027 – diamonds, the jewel of denial”