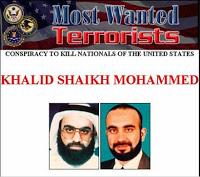 from kltv: The Pentagon has released an audio tape of a closed court session with the suspected mastermind of the 9/11 attacks.

The words of Khalid Sheikh Mohammed have been censored. The Defense Department decided to edit out his comments about his justification for waging a holy war against the United States.

A spokesman says a number of experts listened to the tape and expressed fears it could be used by other militants as a propaganda tool. So, about 10 minutes of the 40-minute tape have been deleted for its release.

The tape comes from a court session at Guantanamo Bay in March that determined Mohammed would be declared an "enemy combatant" and held indefinitely.

At the hearing, Mohammed confessed to the beheading of American journalist Daniel Pearl and to playing a central part in 30 other worldwide attacks and plots that killed thousands of victims.

(Click here to read a summary of the evidence.

A Pentagon spokesman said the passage was deleted from the audio version of Mohammed's hearing before a military panel at the US military base in Guantanamo Bay, Cuba because of its potential propaganda value.

The following audio/video clip is from CNN's Newsroom, broadcast on September 13.