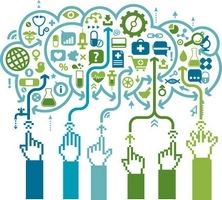 from modernhealthcare.com: Connections between people and interoperable computerized devices such as home and personal-health monitors will become so ubiquitous that, in little more than a decade, we'll scarcely know the devices and networks are there, according to a report based on canvassing of more than 1,600 technology experts on the future of the Internet, released by the Pew Research Center Internet Project. A majority of respondents believed that by 2025, there will be a “global, immersive, invisible, ambient networked computing environment built through the continued proliferation of smart sensors, cameras, software, databases, and massive data centers in a world-spanning information fabric,” the Pew authors of “The Internet of Things Will Thrive by 2025,” said. That network will be known as the Internet of Things or the Cloud of Things, the report posited.