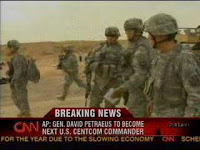 from thinkprogress: The AP reports that President Bush has tapped Gen. David Petraeus, currently the Commanding General of the Multi-National Force in Iraq, to become the new commander of the U.S. Central Command. He will replace Adm. William Fallon, whose “premature departure” at least stemmed from policy disagreements with Petraeus, “a favorite of the White House,” according to The New York Times. In March, former intelligence analyst William Arkin said that Petraeus was “the man most responsible for the departure of Fallon” because “the two were at odds on virtually every element of Iraq policy.”