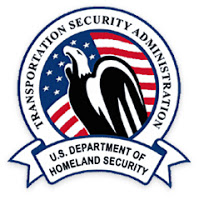 from boing boing: Patrick Smith, the airline pilot who co-writes the NY Times’s Jetlagged Blog has written a corker of an editorial railing against the bullshit "security" procedures that the TSA has put into place. Smith is hopping mad and stops just short of calling for a revolution. Man, I’d be with him at the barricades.

"No matter that a deadly sharp can be fashioned from virtually anything found on a plane, be it a broken wine bottle or a snapped-off length of plastic, we are content wasting billions of taxpayer dollars and untold hours of labor in a delusional attempt to thwart an attack that has already happened, asked to queue for absurd lengths of time, subject to embarrassing pat-downs and loss of our belongings.

The folly is much the same with respect to the liquids and gels restrictions, introduced two summers ago following the breakup of a London-based cabal that was planning to blow up jetliners using liquid explosives. Allegations surrounding the conspiracy were revealed to substantially embellished. In an August, 2006 article in the New York Times, British officials admitted that public statements made following the arrests were overcooked, inaccurate and "unfortunate." The plot’s leaders were still in the process of recruiting and radicalizing would-be bombers. They lacked passports, airline tickets and, most critical of all, they had been unsuccessful in actually producing liquid explosives. Investigators later described the widely parroted report that up to ten U.S airliners had been targeted as "speculative" and "exaggerated."