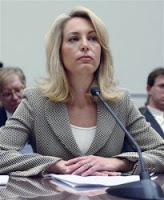 from ap/breit bart: Valerie Plame, the CIA operative whose outing led to the conviction of a top Bush administration official, told Congress on Friday she believes her identity was disclosed for "purely political reasons."

Plame, whose outing triggered a federal investigation, answered questions for the first time. She said that she always knew her identity could be discovered by foreign governments but said she was surprised to be identified by her own government.

"My name and identity were carelessly and recklessly abused by senior official in White House and State Department," Plame testified before the House Oversight and Government Reform Committee. "I could no longer perform the work for which I had been highly trained."