from thinkprogress: Eleven years ago, the neoconservative Project for a New American Century (PNAC) set out its statement of principles advocating the overthrow of Saddam Hussein, putting the country on the road to a preventative invasion of Iraq. Signatories included future Iraq war architects Donald Rumsfeld, Dick Cheney, Paul Wolfowitz, and Elliott Abrams, as well as neoconservatives like Bill Kristol and Robert Kagan... But just as the neocons are attempting to run from responsibility for the Iraq war, it appears PNAC may be abandoning its own website.

un racism investigator to visit US

from reuters: A special U.N. human rights investigator will visit the United States this month to probe racism, an issue that has forced its way into the race to secure the Democratic Party's presidential nomination. The United Nations said Doudou Diene would meet federal and local officials, as well as lawmakers and judicial authorities during the May 19-June 6 visit. "The special rapporteur will...gather first-hand information on issues related to racism, racial discrimination, xenophobia and related intolerance," a U.N. statement said on Friday.

from wufu: After their daughter was born, Bi Kaiwei and his wife, Meilin, decided to adhere to China's one-child policy and its slogan, "Have fewer kids, live better lives." For them and other couples who lost an only child in this week's massive earthquake, the tragedy has been doubly cruel. Robbed of their sole progeny and a hope for the future, they find it even harder to restart their shattered lives, haunted by added guilt, regret and gnawing loss.

(450kb PDF) for their role in illegally spying on Americans, AT&T and Verizon were awarded a major contract by the Department of Homeland Security (DHS), Washington Technology reports: "Verizon Business will perform the lion's share of the work on the Homeland Security Department's OneNet telecommunications contract with support from AT&T Government Solutions."

'operation terminal stinger' set for penn airport
from pittsburgh tribune-review: Arnold Palmer Regional Airport in Unity will be the site of an emergency response training exercise. “Operation Terminal Stinger” is scheduled for June 6 and 7 at the facility near Latrobe. The exercise is required by the Federal Aviation Administration and will feature a scenario in which a terrorist cell will down an aircraft with a shoulder-fired missile. 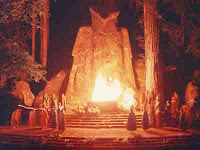 from washington post: Immense power and staggering wealth are as deeply imbedded in the traditions of the Bohemian Club as they are in the grove itself, 100 acres of old-growth redwoods spared from timber companies a century ago in the name of preservation. Which only deepens the dismay that has greeted the club's request to the state of California for permission to log as much as 1 million board feet from the place to raise some cash.