police spied on activists in maryland

from washington post: Undercover Maryland State Police officers conducted surveillance on war protesters and death penalty opponents, including some in Takoma Park, for more than a year while Robert L. Ehrlich Jr. was governor, documents released yesterday show. Detailed intelligence reports logged by at least two agents in the police department's Homeland Security and Intelligence Division reveal close monitoring of the movements as the Iraq war and capital punishment were heatedly debated in 2005 and 2006. Organizational meetings, public forums, prison vigils, rallies outside the State House in Annapolis and e-mail group lists were infiltrated by police posing as peace activists and death penalty opponents, the records show. The surveillance continued even though the logs contained no reports of illegal activity and consistently indicated that the activists were not planning violent protests. 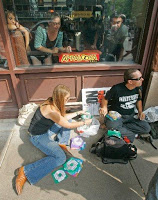 from rocky mountain news: Dozens of protest groups are planning a full schedule of classes, concerts, marches and other actions during the Democratic National Convention, hoping to capture the world's attention and recruit new activists. They are both energized and organized, and most insist they are not looking for trouble. "We are completely peaceful," said Rob Weiland, a 37-year-old courier from Denver and member of the group We Are Change Colorado. "We follow the ideals of Ghandi." The organization will be videotaping other groups and police during the DNC, scheduled for Aug. 25 to 28.

fbi to descend on denver for dem event

from politics west: "Hundreds" of FBI agents will be in Denver during the Democratic National Convention, according to James Davis, the FBI special agent in charge of the Denver field division that oversees Colorado and Wyoming. The FBI is "responsible for gathering intelligence on, primarily terrorist activity, any possible terrorist activity with regard to the convention, and make sure we get that intelligence to our partner agencies so they can be prepared," according to a "Colorado Matters" interview that aired today on Colorado Public Radio. The audio is available here. (m3u)