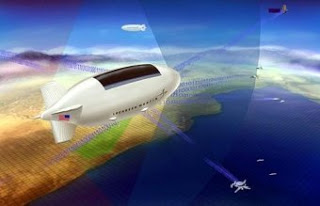 from steve watson: The Pentagon has announced intentions to launch an entire fleet of giant 450-foot-long airships which will act as a massive airborne radar system providing perpetual surveillance of vehicles, planes and people on the ground. The Pentagon said Thursday that it intends to spend $400 million to develop a giant dirigible that will operate on hydrogen fuel cells and solar panels, floating 65,000 feet above the Earth for 10 years, reports the LA Times. The airships will be around twenty times larger than the Goodyear Blimp, giving ground operators the capability of monitoring an area hundreds of miles in diameter at a time with surveillance equipment, such as high-resolution cameras, in addition to the football-field-sized radar antenna... In 2006, reports regarding the project resurfaced as DARPA courted defense contractors Raytheon, Lockheed Martin and Northrop Grumman to develop the airships. The Air Force has signed an agreement with DARPA to develop a demonstration dirigible by 2014.

dhs proposes US gun laws to fight mexican drug cartel violence
from kurt nimmo: Roger Rufe, Homeland Security’s head of operations, wants to further erode the Second Amendment. Rufe told lawmakers more restrictive gun control and law enforcement may be needed in the Southwest United States in response to the drug war in Mexico, according to the Associated Press. Rufe also said protecting border may require “deploying military personnel and equipment to the region if other agencies are overwhelmed.” He did not specify what circumstances would trigger a call for troops. “We would take all resources short of DoD and National Guard troops before we reach that tipping point,” Rufe told lawmakers on a House homeland security subcommittee. “We very much do not want to militarize our border.” Democrats joined the chorus rallying against the Constitution and the Bill of Rights. 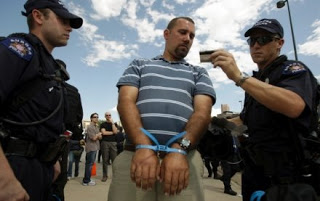 from truthnews: A secret report distributed by the Missouri Information Analysis Center lists Ron Paul supporters, libertarians, people who display bumper stickers, people who own gold, or even people who fly a U.S. flag and equates them with radical race hate groups and terrorists. This is merely the latest example in an alarming trend which confirms that law enforcement across the country is being trained that American citizens are a dangerous enemy.

emergency: this book will save your life

how to: survive the apocalypse (think diy knives & solar stills)
from danger room: Best-selling author Neil Strauss helped Jenna Jameson show us How to Make Love Like a Porn Star. Then he taught us the finer points of attracting mates in The Game: Penetrating the Secret Society of Pickup Artists. Now, Strauss has new knowledge to drop. In his just-published book, Emergency: This Book Will Save Your Life, he schools us on what to do, if everything suddenly goes to hell. Strauss has spent the last several years training to become a full-fledged survivalist - learning how to live off the land with D.I.Y. weapons, homemade solar stills, debris huts, and hot-wired cars. He talks to Danger Room about how he got his new skills. And in an exclusive video, Strauss shows what to do, if you really need a knife - and all you have is a cigarette.

wireless tasers extend the long arm of the law