police storm church of the nativity to break up brawling priests 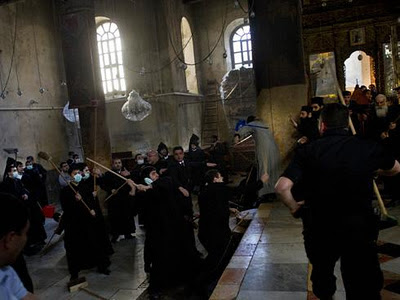 from beliefblog: Clergy from two Christian sects came to blows in the Church of the Nativity on Wednesday morning, prompting police to storm the Bethlehem holy site. Several dozen Greek Orthodox and Armenian priests were cleaning the interior of the church Wednesday morning when, according to witnesses, two of them began fighting. The fight quickly escalated, and soon, 50 to 60 priests were exchanging blows with broomsticks. Bethlehem police were sent in to quell the fighting, Palestinian police Maj. Ahed Hasayen said… In 2007, clergy from the same sects came to blows in a similar incident.